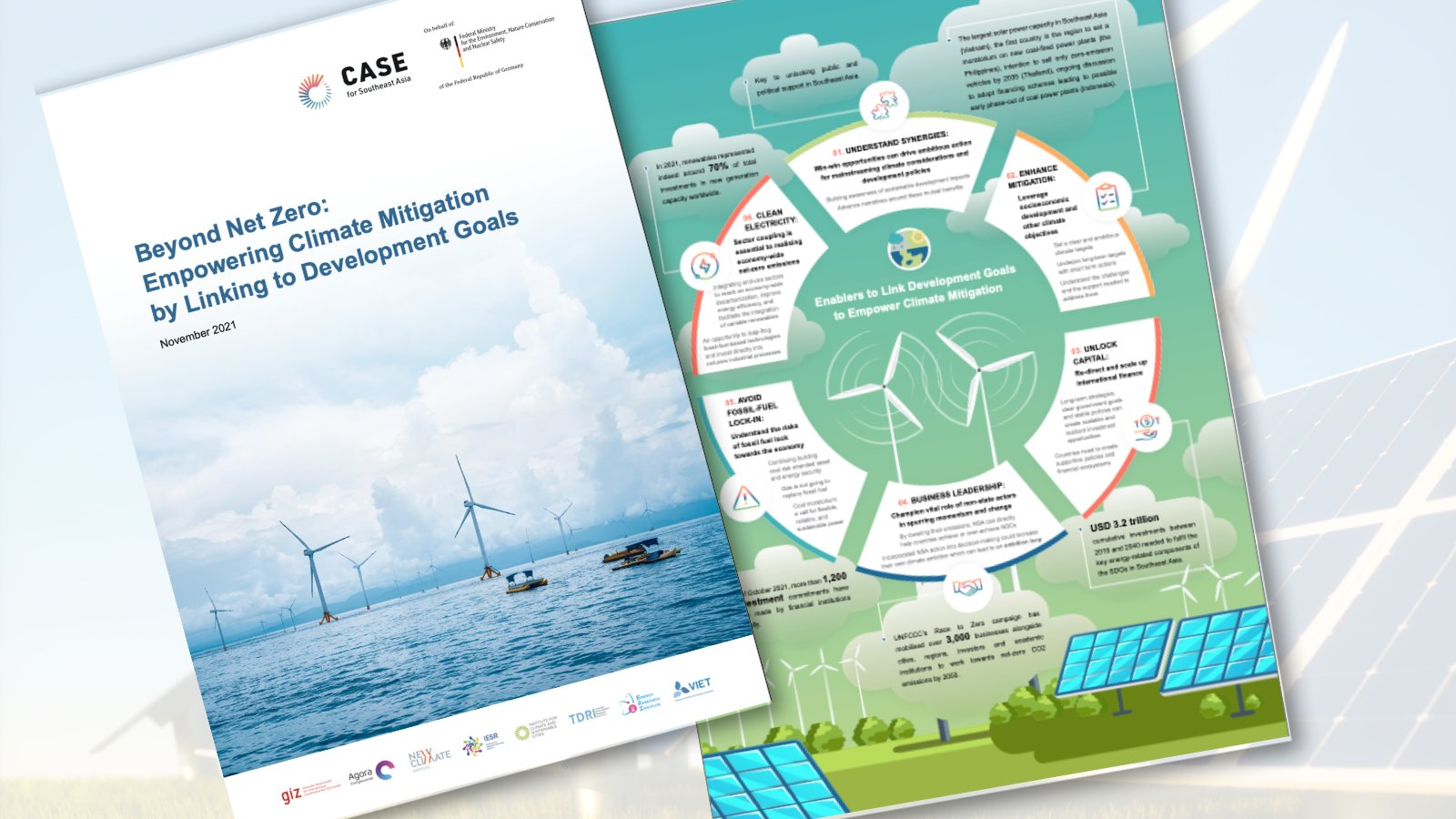 Bangkok, Hanoi, Jakarta, Manila – On 12 November 2021 a new report titled “Beyond Net Zero: Empowering Climate Mitigation by Linking to Development Goals” was issued by leading climate and energy think-tanks in Indonesia, the Philippines, Thailand and Vietnam, with support from NewClimate Institute and Agora Energiewende as part of the CASE project.

The report provides a new perspective on the critical international climate discussions by arguing that countries’ climate plans can be implemented in a more effectively, timely, and sustainable manner if integrated into their overall development planning to meet the needs of their populations. To this end, the report identifies six ‘bridging concepts’ and enablers relevant to Southeast Asia and its net-zero efforts, while detailing their potential to accelerate the transition towards resilient national economies.

The report argues for the importance of going “Beyond Net Zero”, to ensure that countries achieve balanced and complementary climate plans that first and foremost meet their national development needs, but also accelerate the decarbonisation of their energy sectors and their economies. “If the public cannot identify with the developmental goals arising from their government’s climate strategies, the political consensus required to make increasingly difficult decisions will be hard to achieve or if realized, it will be hard to sustain,” said Fabby Tumiwa, Executive Director at Institute for Essential Services Reform (IESR) in Indonesia, one of the organizations involved i producing the report.

The report points to significant, ambitious actions that governments in Southeast Asia have taken to limit the future approval of coal-fired power generation. For example, in October 2020, the Philippines became the first country in the region to announce a moratorium on greenfield coal. Indonesia passed its own moratorium in 2021, and government officials are now in discussions on the early phase-out of coal power plants.

“We believe that it is helpful to emphasize the mutual benefits between sustainable development and climate policy, and that this will provide justification and support for more ambitious climate action,” said Nhien Ngo, Executive Director of Vietnam Initiative for Energy Transition (VIET), one of the organizations collaborating on development of the report.

The report also identifies the key role that corporate commitments and action can make in the region—pointing to numerous announcements by multinational and regional companies of their intention to accelerate efforts to install clean energy and reduce their carbon footprints.

“Facing a reckoning over their contribution to the climate emergency, companies have increasingly made pledges or climate commitments, and this is a welcome development,” said Kannika Thampanishvong of the Thailand Development Research Institute, which contributed to the report. “Government should create an enabling environment for these corporations to achieve their climate commitments and remaining competitive, including access to finance and supporting infrastructure. In this way, the corporate actions can catalyze larger development goals in the region.”

The report demonstrates that cost reductions in emerging clean technologies are already leading a significant shift towards sustainable alternatives such as renewable energy, decentralised power systems and battery storage. The report emphasizes the importance of zero-carbon renewable energy as the backbone for economy-wide decarbonisation pathways and highlights the opportunities for southeast Asian countries to invest early in the electrification of transport and industry to achieve sustainable economic and social development.

“An important insight of this report is that climate change goals cannot be viewed in isolation,” added Jesse Scott, Director of International Programmes at Agora Energiewende, a German think tank focused on the energy transition, which co-authored the report.  “In Southeast Asia, the political priorities for most governments are economic growth, boosting productivity and reducing inequality. But it also needs to be recognized that these priorities cannot be achieved without globally coordinated action to address climate change. Significant reforms of the international finance landscape will be needed to redirect and scale the volumes of international finance needed to achieve this transformation.”

“In this report, which is the summation of research in close cooperation with local partners in Southeast Asia, we discuss a different paradigm for multilateral cooperation on the pursuit of net-zero, which could bring benefits to implementing the global efforts towards 1.5 °C,” said Frauke Roeser, a Founding Partner at NewClimate Institute.

The report was launched at the tail end of the COP 26 meeting in Glasgow, as nearly 200 countries reached a fragile agreement to intensify global efforts to fight climate change, with calls for countries to return next year with stronger emissions-reduction targets and promises to double the money available to help countries cope with the effects of global warming. The report makes a strong call for immediate action and the linking of climate planning to national development priorities to build and broaden political support.

The CASE programme provided a media briefing on the report on Wednesday 17 November. Readers can download the report here.